Almost all shooters – and hunters – are plenty familiar with how Old West cowboys acquired both a long gun and handgun in the same chambering. That combination was most likely a lever-action rifle and a single-action revolver. A few popular pairings would have been traditional handgun rounds like the .44/40 Winchester, .45 Colt, and .32-20 Winchester.

Old-school shooters paired Colt and Winchester. Our modern-day mates are Henry Repeating Arms and Magnum Research. The method of putting together the perfect combination today may not be quite as critical to life and death, but it’s certainly a viable option for hunters, ranchers, and shooters building a supply of ammunition.

We’re taking this one boot step beyond the Old West today, as modern metallurgy and heavy-built actions allow us the ultimate big-bore combo rig that’s not in a handgun chambering but in the classic walloping .45-70 Government. The Magnum Research Biggest, Finest Revolver (BFR) and Henry Repeating Arms All-Weather Side Gate rifle are perfect playmates. That’s a heckuva long name for one of the company’s most serious lever guns. For reference, it’s also known in its latest catalog as H010GAWP. Its metrics put it as close to an alternate style of scout rifle as any lever carbine. The extended Picatinny rail allows optics to be mounted in a wide range of positions, and those optics could be long-eye-relief scout scopes, red dots, or traditional rifle scopes. Some shooters may forgo the optic altogether, as the rail includes an integral rear peep sight that acquires quickly with the front blade.

At 18.43 inches, the round barrel is shorter than most of its counterparts. With an overall length of only 37.5 inches, this is one wieldy rifle. In Henry’s All-Weather rifle fashion, the metalwork wears what they call an Industrial Hard Chrome satin finish. The package weighs in at 7.1 pounds empty and sans scope. Stocks are black stained American hardwood with a black ventilated rubber recoil pad.

Like most new production Henry’s, this model makes use of the side loading gate – part of its long name – in addition to the usual tubular charging port. This rifle, though short, holds five rounds in the magazine tube. The gun boasts a large loop lever, swivel studs, and the ability to down big and dangerous game. 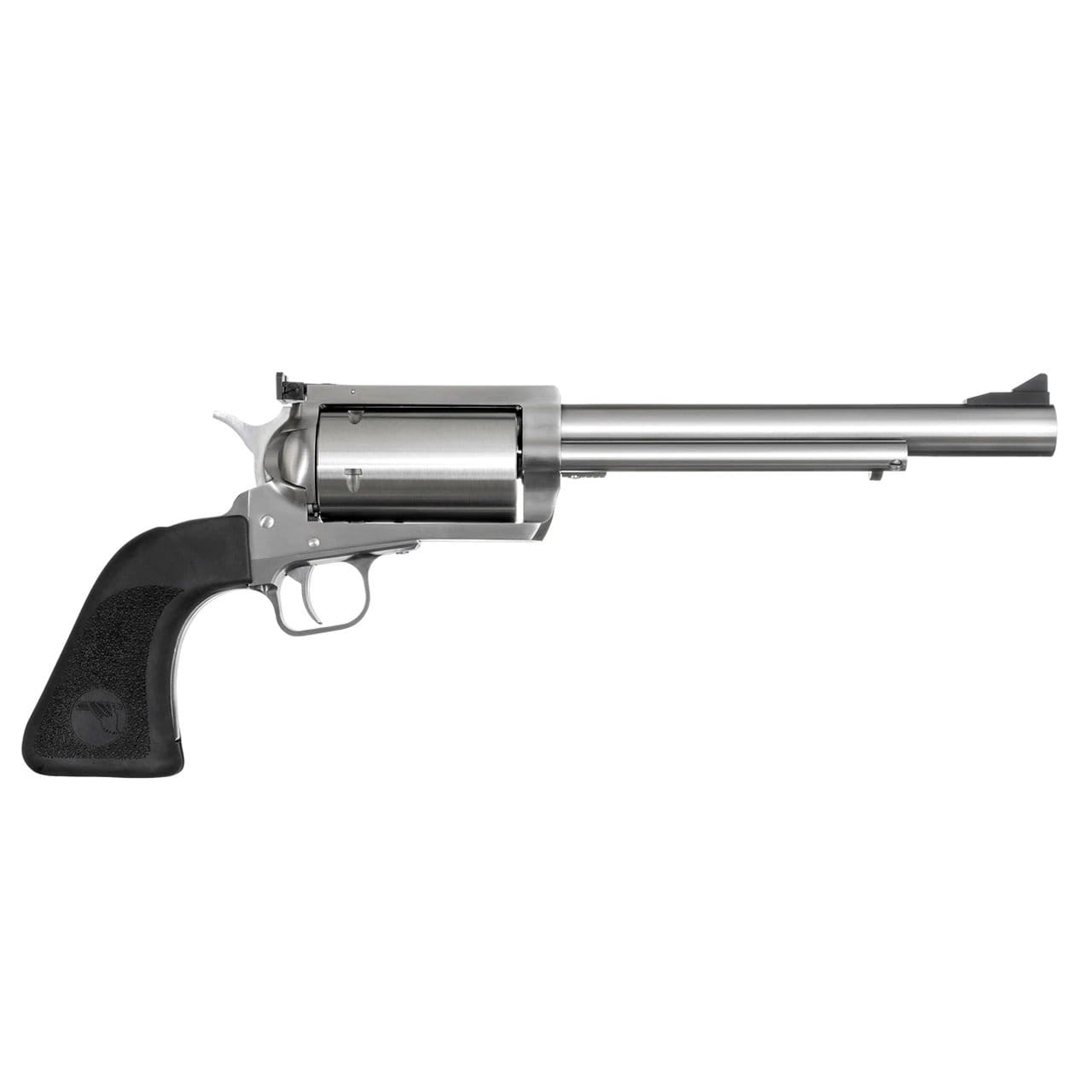 The BFR is touted by the company as “the most powerful production single action made” with over a dozen chamberings on two frame sizes. That’s what makes it the biggest, while the heavy-built stainless construction makes it the finest.

These solid stainless wheelguns are intended for hard use in any kind of conditions, including adverse weather where hunters often find themselves. Magnum Research manufactures versions for all types of shooters, including standard “short-cylinder” renditions like the .44 Magnum and .357 Magnum. But the beef of the roundup centers on what the company calls “long-cylinder” variants. That includes chamberings like the .45-70 Gov’t, .30-30 Winchester, and even .444 Marlin.

Barrel lengths are available in either 7.5-inch or 10-inch variants with cut rifling. Overall lengths measure 15 inches and 17.5 inches respectively. The finish is a clean, brushed stainless. A black fixed front blade and fully adjustable rear come standard, though all BFRs ship with a silver scope base.

With the company’s custom shop, the sky is really the limit on the BFR – in both creativity and budget. Choose from a wild list of custom chamberings. Make the frame a Bisley grip and add sweet finishes like rich case coloration. No matter which BFR you choose, there’s no way you can be disappointed.

WHAT MAKES THIS THE BIGGEST, BADDEST PAIRING?

A few factors help define this combo as our crush, but one word describes it best – “trusted.” Both Henry and Magnum Research have a track record of turning out well-built, American-made arms with exceptional customer service. When chambered for a round like .45-70 Gov’t, with often big and dangerous game on the menu, hunters must unequivocally trust the reliability and accuracy of both the gun and round.

When not only a clean and successful harvest is key but also the safety of the hunter is on the line, selecting the correct tools is paramount. That is not, however, to discount the critical importance of two other factors – considerable practice and buying only the biggest (recoiling) bore you can shoot well.

It’s no mistake that we hunted Cape buffalo in Africa – on two separate trips – with the .45-70 Gov’t. The first foray saw that Henry rifle take down the buffalo with one well-placed shot. The second saw an even bigger beast drop with two rounds from the BFR. With a wide range of factory ammunition and reload recipes, the chambering can be tailored to handle smaller plains game as well.

But it’s not only for worldly adventures. In fact, the .45-70’s rich American historical bloodlines run deep, from U.S. military use and competition shooting to bison hunts. There’s good reason the round is still thriving 150 years later. We’ve harvested whitetails, varmints, warthogs, and all sorts of African plains game with this round from these two guns. They pack easily, look good together, fly well, shoot with 100 percent reliability, and do the job every single time.

We certainly acknowledge that a .45-70 Gov’t pairing is not for everybody. In addition to the cost of firearms and ammunition, the recoil factor is awfully high. It’s considerably greater than handgun rounds like the .44 Magnum or .45 Colt. While there’s really nothing in the world that cannot be harvested with the .45-70 Gov’t, another traditionally rifle classic can take ample big game with considerably less kick.

Midwestern hunters have been eating by the .30-30 Winchester for decades. And both Henry Repeating Arms and Magnum Research build their respective firearms in that traditional rifle-round combo as well.

Those wanting to partner these same two companies in a more traditional fashion can look to a number of more recoil-friendly combinations. Buyers will find Big Boy lever guns and single-action wheelguns available in both for .357 Magnum, .44 Magnum, .45 Colt, and even .410 shotgun.

Our big-bore combination not only has an equally-sized cool factor but, moreover, doubles down on the pairing idea with the ultimate in capability. Whether hunting whitetails, water buffalo, or anything in between the world over, this partnership will get the job done well and safely.

That’s one for the belt rig – or in this case, chest holster – and another for long-range work. One do-all caliber. Two USA-made firearms. Same terminal results. The price of admission may be a little high, but the ride is priceless, and this pair of fine firearms will be around to pass from one generation to another long after we’re gone. A trio of new .357 magnum wheel guns are headed to the market in 2023 under a familiar old name. Turns out, Rossi is back in the revolver game. Amadeo Rossi, first established in Brazil in 1889, long had a history with various double-action .38 and .357 Magnum revolvers and only exited that market in recent years while…